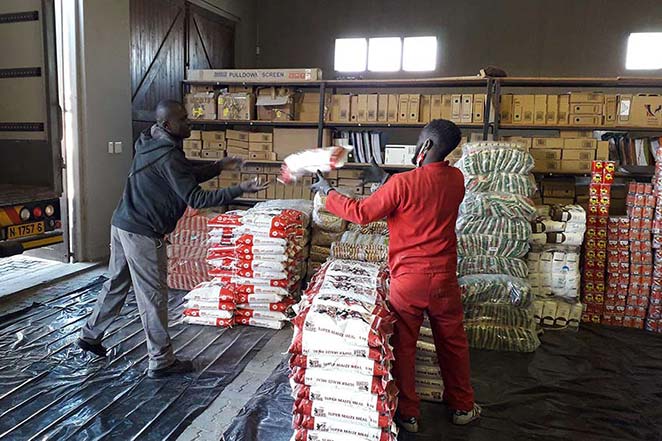 Etango has benefited from extensive exploration and feasibility activity since we listed as a public company on the Australian Securities Exchange (ASX) in 2005. The Etango tenements possess a globally large-scale uranium mineral resource. A 20Mtpa development at Etango was the subject of a Definitive Feasibility Study (DFS) completed in 2012 and a DFS Optimisation Study completed in 2015. Bannerman constructed and operated a Heap Leach Demonstration Plant at Etango, which comprehensively de-risked the acid heap leach process to be utilised on the Etango ore.

Namibia is a premier uranium investment jurisdiction, with a 45-year history of uranium production and export, excellent infrastructure and support for uranium mining from both government and community. As the world’s third largest producer of uranium, Namibia is an ideal development jurisdiction boasting political stability, security, a strong rule of law and an assertive development agenda.

Bannerman has environmental approvals for the proposed Etango mine, based on a 12-year environmental baseline. Bannerman is a socially responsible leader within Namibia and exercise best-practice governance in all aspects across its business.

In August 2021, Bannerman completed a Pre-Feasibility Study on an 8Mtpa development of Etango (the Etango-8 Project). The PFS has demonstrated that this accelerated, streamlined project is strongly amenable to development – both technically and economically.

Bannerman Energy exercises best-practice environmental, social and governance leadership in all aspects of our business and is highly respected by stakeholders in Namibia and beyond.  In recognition of our contemporary thought-leadership on ESG within the uranium sector, Bannerman CEO, Brandon Munro was recently invited as a keynote speaker on ESG matters at the AusIMM International Uranium Conference (2021) and the World Nuclear Fuel Cycle conference (2021).

Since commencing operations in Namibia in 2006, Bannerman has demonstrated exemplary environmental standards.  Amongst our many environmental achievements, we are particularly proud of our extensive environmental baseline, dating back to 2008; innovations in drill pad rehabilitation in the Namib desert (subsequently adopted by other uranium mining companies operating in the area); and our peer-reviewed ESIA that formed the basis of environmental clearance for the Etango uranium project.  Bannerman CEO, Brandon Munro, served on the steering committee of the world-first Strategic Environmental Assessment (On Cumulative Effects of Uranium Mining in the Namib Desert) and has provided peer review of publications from the UN Economic Commission for Europe on content related to the environmental impact of uranium mining.

“We found that Bannerman sets the highest environmental standards for all aspects of their operation. We applaud Bannerman for its openness and for setting an example.” – Namibian Chamber of Environment

Bannerman’s outstanding community engagement has its foundation in a highly progressive ethos of transparent engagement during the company’s early years in Namibia, long before investor focus on CSR or ESG was a driver of corporate behaviour.  Our company has built a trusted and respected reputation with our host community, regulators and government.  This approach is best illustrated by the success of our partnership with the Namibian Tourism sector, a major employer and economic contributor to Namibia.  Through a series of partnerships which have enhanced our relationship with tourism operators and broken down decade-long traditional rivalry between mining and tourism in Namibia, Bannerman Managing Director (Namibia), Werner Ewald, was awarded the Hospitality Association of Namibia Tourism Personality of the Year award in 2019.

Operating in a sensitive and highly regulated commodity demands the highest level of governance.  Bannerman has consistently operated at a governance level that would be the pride of companies many times our size.  Our commitment to governance extends to industry leadership, with management holding key positions in peak industry bodies. Mike Leech, chair of Bannerman Namibia, is a past president of the Chamber of Mines and was responsible for founding the Namibian Uranium Association and is today recognised as an honorary life member. Brandon Munro served as Governance Advisor to the Namibian Uranium Association and Strategic Advisor – Mining Charter to the Chamber of Mines.  Werner Ewald has chaired the Chamber of Mines’ Safety Committee and serves as a Trustee of the Namibian Uranium Association.

In 2010 the Bannerman board approved a CSR Charter and Community Development Program that comprehensively established program objectives, targeted development sectors and communities, and criteria for financial contributions.  Whilst Bannerman has been required to scale down its operations in response to a persistent down-turn in the uranium sector, it has never imposed cuts on its corporate social responsibility budget.

Namibia has a small population, one of the largest Gini coefficients globally and too many people living in rural poverty.  The poor standards and availability of education are a lasting legacy of neglect during the apartheid era, when Namibia was a protectorate of South Africa.

Bannerman identified a high level of school drop-out as a contributor to re-enforcement of the poverty cycle and block to employment opportunities in later life.   In consultation with communities, educators and government, Bannerman understood that several of the causes of this drop-out rate were addressable and saw an opportunity to intervene in this cycle.

Background on our initiative:

In 2011 a Namibian employee was deeply discouraged by the primary school drop-out rate in rural areas, knowing that once a child had left the education system, they were very unlikely to return.  For primary school drop-outs, this almost certainly meant illiteracy and poor numeracy, with a life-long impact of reduced employment opportunities and likely entrapment into the poverty cycle.  He had the idea of inspiring young learners to fight to stay at school by providing them with uniforms and materials to help them and their families.

The concept won the support of then-General Manager (Namibia), Brandon Munro, who elevated the proposal to an enthusiastic Board.

Bannerman consulted widely during the formulation and design of the concept, including with education officers, school principals, education specialists, community leaders and the Minister of Education, the late Dr. Abraham Iyambo.  Dr Iyambo was so taken with the concept that he insisted on personally participating in the launch of the program, which was televised on national TV (18 March 2011).

It was decided to approach school principals to nominate the learners most at risk of dropping out, and names, shoe sizes and uniform specifications were obtained.  Bannerman employees personally handled the logistics of ordering, packaging and distributing the ELA packages.

In its first year, 20 schools in the Erongo Region benefitted, with 320 learners receiving uniforms and shoes (and having their school fees paid – at that time primary education was not free).  We then engaged in wide consultation to understand what adjustments were required, where we needed to manage community expectations in future years and to ensure the program remained high-impact.  Werner Ewald carefully expanded and improved the program with a long term objective.

Our employees have remained enthusiastically committed to the Early Learner Assistance Scheme.  They have logged nearly 15,000kms, traveling to remote schools to personally deliver individualised parcels of school clothing, stationery, backpacks, socks and shoes – a gesture that expresses to each learner that they are special and worthy of help.  Employees are valuable role models and give presentations that encourage learners to stay at school and follow their dreams.

The Minister of Mines & Energy requested Bannerman to extend the program to other parts of Namibia (beyond Bannerman’s host community in Erongo) in particular into communities without the social benefits of mining activity.  Accordingly, the program was extended to Omaheke, Hardap Kunene and Kavango West Regions.

Pre-pandemic we targeted two northern regions of Kavango West and the Kunene Region. These regions are two of Namibia’s most destitute, with highly challenged learning environments. Bannerman employees visited 17 schools in these regions over 2 weeks.

With the pandemic disrupting the school calendar in 2020 and many schools closing, parents had more pressing needs than school uniform packages. Children who lived in school hostels were sent back home to unemployed parents and feeding their children became a real challenge as this was previously taken care of by the schools and government.  Bannerman over the last year provided food parcels to needy families from the target schools, together with messages of encouragement. The food care package consisted of basic food supplies such as baking flour, porridge, sugar and bathing soap and toothpaste. This not only had an impact on the learners, but their immediate families.

On 18 August 2021, the 2021 Early Learner Assistance program kicked off. Initially the program will visit 7 schools, providing about 300 students with school clothes. We are also providing each school with COVID-19 essentials including, masks, sanitizer and swipes.

To date over 3,000 learners have benefited from the program and by the end of 2021 we will have supported 3,600 vulnerable scholars.  Many, if not most, of these learners would have left the school system without Bannerman’s intervention.

In addition to the direct impact on those learners and their families, Bannerman’s support has profoundly impacted school teachers and principals at a time when motivation levels are low.  Further, through involving the wider community in the program delivery, rural attitudes to the importance of education are evolving and families are becoming more supportive of diverting young children from domestic or herding work to school.

Bannerman has an outstanding record as a leader in corporate social responsibility in Namibia through the Early Leaner Assistance Program and other initiatives in the education, environmental, community and tourism sectors.  As a testament to the high regard in which the company is held locally, Bannerman management have been invited by the Chamber of Mines as keynote speakers on the topic of CSR/ESG at the last four Namibian Mining Expo.  Through this platform, Bannerman has sought to make the ELA program “open source” with the aim of encouraging other mining companies to adopt and improve the initiative within their own host communities.