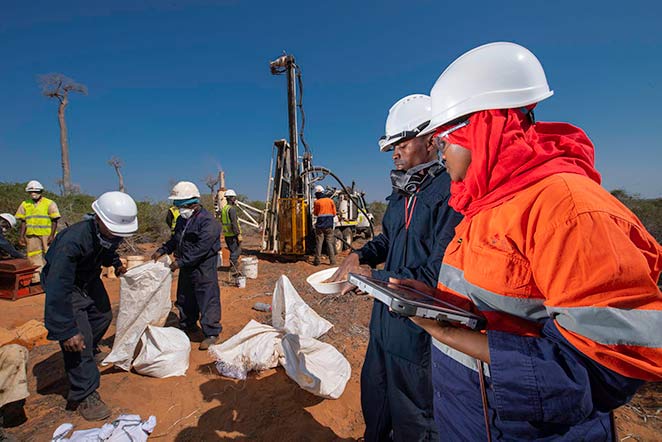 Base Resources is an Australian based, African focused, mineral sands producer and developer.

The Company operates the Kwale Operation in Kwale County, Kenya, and is developing the Toliara Project in Toliara, Madagascar.  Base Resources produces a suite of mineral sands products namely ilmenite, rutile, and zircon.

Base Resources is recognised as a leader in the African resources industry with a track record of excellence in safety, community engagement and environmental stewardship.

The Toliara apprentice program, and wider workforce development programs for the Toliara Project, were conceived following construction of the Kwale Operation in Kenya. Due to pronounced shortages of semi-skilled and skilled professionals in the Kwale region at the time, many Kwale locals were not suited for initial construction employment opportunities.

As such, Base Resources invested heavily in local workforce training and development in Kenya. A significant learning from the success of this was the importance of prioritising similar programs in support of local employment during the pre-construction phase of any future projects.

Base Resources acquired the Toliara Project in Madagascar in 2018. Due to the lack of other large scale mining or industrial operations in the Toliara region, it quickly became apparent that there would not be a large enough pool of local semi-skilled or skilled professionals to support the construction or operation of the project. A Toliara workforce development program was established with a key element being the identification and recruitment of between 20-30 young Malagasy men and women to participate in a two-year apprenticeship program located at our Kwale Operation in Kenya. The objective was to align the completion of the Toliara apprentice program to coincide with the commissioning of the Toliara mine.

To meet our goal of creating benefit for the local communities in which we operate, participants had to be recruited from specific local Toliara communes, be aged between 19-25 years of age and pass multiple pre-training screening assessments. Out of 500 candidates on our potential employee database, 50 were shortlisted to proceed to English language training. After several months of language training, team building exercises and a series of assessments, a group of 24 students were selected for the program (16 male and 8 female) and left for Kenya to commence the apprenticeship program.

The biggest challenge has been the COVID-19 pandemic and subsequent international travel restrictions, forcing the cancellation of the apprentices’ scheduled home visits. This was particularly difficult for many of these young men and women as it was often their first time away from home and family is very important in Malagasy culture. To address this, Base Resources provided access to mobile phones and other technology in both Kenya and Madagascar so that the apprentices and their family members could video chat on a regular basis.

The PEM identifies several priority areas including job creation, the empowerment of women and development of the country’s mining potential. The Toliara apprentice program addresses these objectives while also aligning with broad national and community expectations around workforce development.

Some of the most vocal supporters of the Toliara Project are community and government leaders who can see that it will create significant employment opportunities in the region and as such they have firmly supported the Toliara apprentice program. This included a large event hosted by the national government when the apprentices left Madagascar for Kenya.

Communities in the Toliara region were asked to recommend applicants for the apprentice program, with Base Resources giving preference to those residing in the more immediate environs of the future mine and port facility with progressively lower priority given to those living further away.

Upon completion, apprentices received internationally recognised certification which will support their employment in Toliara, or elsewhere across Madagascar if they do not secure employment with the Toliara Project.

Using learnings from Kwale and knowing similar skill sets would be needed at Toliara, the Toliara apprentice program was targeted towards students gaining skills in the areas of electrical, automotive and industrial mechanics. To gain the theoretical and practical expertise required, the program was designed to have two components: a practical component on site at our producing mineral sands operation in Kenya, and a theoretical component from the Kenyan National Industrial Training Authority (NITA).  Thus, the Toliara apprentice program required a unique partnership between NITA and Base Resources’ Malagasy and Kenyan operations.

As a result of Base Resources and NITA’s long standing partnership, NITA agreed to change the course structure to condense on-campus learning so students could spend more time on practical skills training at the mine site.

The value of these qualifications is significant to both the individual and the community. As the qualifications are internationally recognised, they can be used across Madagascar or in other countries, and as the certificates are in acknowledged skill shortage areas the apprentices will be able to use these skills to gain employment in a variety of industries.  Many of the apprentices have stated that if they are not able to secure employment with the Toliara Project that they will seek to pass on their new expertise to fellow Malagasy in the Toliara region.

The Toliara apprentice program adapted various elements of a traditional program to encourage successful outcomes for participants, including:

More videos can be found here

Image: The Minister for Youth and Sport farewells the apprentices at a ceremony in Madagascar. 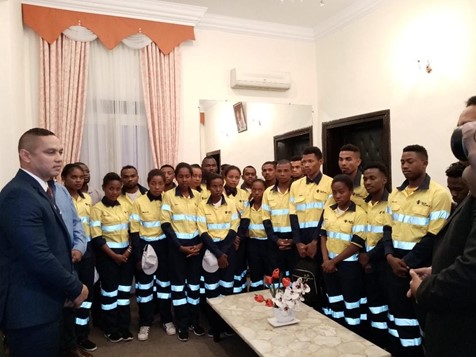